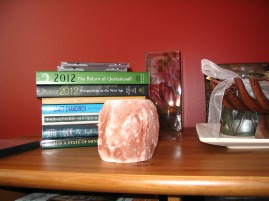 This series of blogs isn’t meant to elicit sympathy but hopefully to inform and create awareness. Thank you in advance for your thoughts.

I haven’t blogged in a while because, well, I’ve been healing. I’m back to work three mornings a week, up from two, and hoping to add more days as I move along. I am finding that the days I work in the morning, I’m pretty wiped for the rest of the day. The next day, I tend to sleep in late and not have much ambition. It’s frustrating for someone like me whose feet normally hits the floor by 7am, on my days off, and who is on the go from that moment until my head hits the pillow around 10 or 11pm.

I still haven’t had my follow-up appointment with the neurologist, even though the discharge papers from the hospital advised her office would be in touch within six weeks. Because I have no patience, when six weeks came and went, I called the office of the neurologist. It turns out the appointment isn’t made by her office, it’s through the stroke clinic, and they call me, although she sees me there.

As I’ve mentioned, I’m somewhat unique in that I didn’t need any after care, and as a result, I haven’t seen therapists and such who might be able to answer questions that have come up. My main questions were what could, or couldn’t, I take for headaches and for the arthritic pain in my knees. I’d had to postpone the scheduled replacement of my right knee due to the stroke and recent damp weather was not treating me very well. I’d continued to ‘grin and bear it’ but, not knowing when I’d see the neurologist, I really just wanted some direction. So, me being me, I made an appointment with my family doctor. I knew he had at least two reports from the multiple doctors I saw, or who saw me, while I was in the hospital, so it was my hope that he’d be able to answer these basic questions for me.

I arrived at my appointment, with my list of questions and Post-it notes stuck throughout the book on strokes the hospital had sent me home with . Nice of them to send the book but it took me over a month to even open it as my eyes couldn’t focus enough, and when they did, my brain didn’t want to retain the information. My doctor’s nurse mentioned he had the results of my last CT scan, so that’s what I opened the conversation with. He said it showed I had a stroke (yup), it was a bleed (yup), in the cerebellum section of my brain (yup) and there was also a brain edema (what?). Turns out, when the stroke happened, the trauma caused swelling on my brain. Gee….it would have been nice if someone had told me. This could have been why I had immediate and overwhelming nausea my first few weeks home when I made any movements to the left. The CT scan showed that the swelling had reduced greatly, this was done six weeks after I was released from the hospital, but there was still a fair bit of blood pooled from the bleed. I guess this takes quite some time to be reabsorbed but the swelling was what they were most concerned about. Uh…yeah! Me too!

Those who know me know I’ll be having quite the discussion with the neurologist, when I finally get to see her. I saw her in the hospital for a few minutes, but I spoke more with the other three doctors who took care of me than I did her. On the day she saw me, I believe it was the day I was released, she only spoke with me for a couple of minutes; basically to say she saw the MRI and MRA and I would be going home when the other doctor had completed the paperwork. Ah yes, the paperwork. I’ll be talking to her about that. The paperwork advised I would hear from her office within six weeks, as mentioned, it’s not her office that contacts me, nor is it within six weeks. We are now on Week 9, and still no call. Really, let’s be more realistic with the information provided!

I’ll also be asking her about the nystagmus. This is a symptom I had from the stroke, one that has never been told to me. The doctor who had me admitted showed the nurse how my eyes were rapidly moving from side to side. I paid attention and then did the research myself on what it was. I have not idea if I still have some of the nystagmus, although my vision is much better than it was in hospital. Nor do I know if I should have my eyes retested, or go with the prescription I’d received in May but hadn’t had filled yet.

We have amazing health care in Canada, compared to a lot of countries, but it is being stretched to its limits. A patient shouldn’t have to do their own research and look for their own answer; they shouldn’t have to wait months for follow-ups with a specialist. Nine weeks and that’s still waiting for the phone call, not the appointment itself!

I’m truly thankful my stroke wasn’t worse and that I didn’t need any after care, but the fact it wasn’t has left me extremely frustrated with finding my own answers and understanding my own healing process.

5 thoughts on “The road is long”

This site uses Akismet to reduce spam. Learn how your comment data is processed.