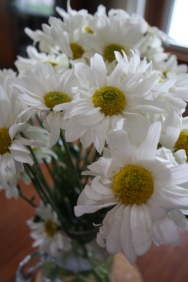 in the yard, on the house and whatever else has been neglected over the winter months, in order to be able to sit back, relax and enjoy the fruit of your hard work during the warmer summer days and evenings.

I purchased my home 4 1/2 years ago and have done some pretty major updates to it yearly since then. Two years ago I finally fenced in the back yard, giving me privacy, and  a place to relax. This being said, I spent much of last summer, after the patio was put in, contemplating how to finish off the yard. I put in two rows of retaining brick to go around a mediation garden, and planned on adding a mini

railroad tie barrier to another garden on the other end of the yard, in which to plant a few vegetable. Then this  Spring arrived and I put in a fire pit, changing the whole concept of my yard design. I’ve now redesigned most of it, in my head anyway, and will be spending the next two or three weeks finishing the work involved, so that I can sit back and probably redesign it all over again next year.

Much like my yard, which I thought I’d planned out completely and then changed because I decided to do one thing differently, my last blog was a result of basically the same thing. I’d planned what I was going to write about, and then technology stepped in and changed it all on me. I actually had most of the blog written when my cordless keyboard decided it was going to have a mind of its 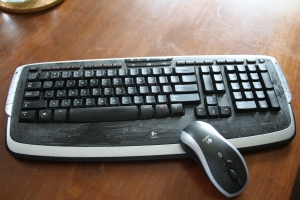 own. I’m a fairly faster typist, somewhere around 70+ word per minute I would think, and I was busying typing away when suddenly my space key started acting up. I’d hit space, and sometimes nothing would happen; or two spaces would happen. On occasion, there would be three or more spaces! I thought it might be an issue with batteries in the keyboard, so I replaced them and settled in to finish my blog. No such luck. Anywhere from zero to six spaces would appear on my monitor when I pressed the spare bar and the time being spent going back to fix it, well it was driving me crazy!

I decided to copy and paste another piece I’d written, about things not being as they might appear, melding the two pieces together and I would simply move on from there. Not surprisingly, technology had other ideas. I saved the piece as I went, proofed and added photos and, when I to posted the blog live, half of it was missing! Gone into thin air, or that mysterious place those things we are sure we saved disappear to. I was beyond frustrated and finished my blog on my tablet, added a couple of not quite in focus pictures, and posted it. I then picked up a wired keyboard, matched it up with a wired mouse my son brought when he came to visit, and I was off to the races again.

It never ceases to surprise me though. As much as you prepare and plan for changes, things can come up and throw a wrench in the works. You have to be able to adjust and adapt and, as they say, go with the flow. While it was extremely frustrating to deal with a keyboard that seems to have its own idea of sentence structure, I was still able to post a blog (although it wasn’t the one I’d planned on), change up some equipment, and get on with other projects.

Things are starting to quiet down around here on the homefront. My first session of Monday night classes, Putting Pen to Paper, are complete and I have had wonderful feedback on the session. They’ll start up again in the fall, along with some other offerings, but until then I’ll continue to blog and take some courses myself. I don’t think we can ever stop learning and I love to share what I learn with other.

Well, it’s cold out today, but the sun is shining now and again. I think I’ll pop outside when the sun makes its appearances and do a bit here and there to prepare for those yard changes that are still just a concept in my head.